Appointment of 30 Bird and public works as Artists-in-Residence at the MRC Laboratory of Molecular Biology, Cambridge Biomedical Campus 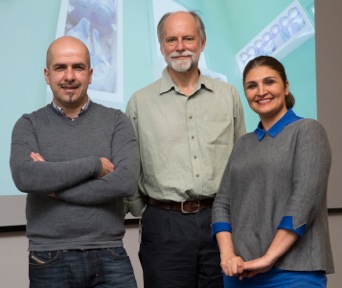 The MRC Laboratory of Molecular Biology (LMB) is pleased to announce the appointment of 30 Bird and public works as LMB Artists-in-Residence starting in April 2015. They are a collaborative team made up of a Cambridge based performance company led by Mehrdad Seyf (30 Bird) and a participatory art and architecture practice led by Torange Kohnsari (public works). They are ground breaking artists who will engage with members of the LMB with the aim to inspire new perspectives and understanding of the LMB’s research, both amongst LMB staff, and the general public. The residency is scheduled to run over 12months.

Mehrdad and Torange were selected by the LMB’s Public Art Steering Panel, made up of LMB staff and external advisors, who were impressed by their enthusiasm about the LMB’s science and their diverse and engaging response to the brief. The LMB is one of the world’s leading research institutes, whose scientists are studying biology on a tiny scale to understand fundamental biological processes and diseases.
“We were attracted to this residency because it provided us with the opportunity to bring together art and science in an innovative and interesting way challenging the more traditional notions of public art”, said Mehrdad Seyf.

He added “The research at the LMB involves work at the minutest detail, with the aim of extracting information that influences life on earth on an epic scale. It is the marriage of these two, the minute and the epic, the scientific research deep within organisms and its physical and social consequences that make the research at the LMB work so exciting to us.”

The LMB residency is the first in a new Artist-in-Residence programme that forms part of the Cambridge Biomedical Campus (CBC) Public Art Programme. The Programme is led and funded by property developers Countryside Properties and Liberty Property Trust under the s106 agreement with Cambridge City Council to deliver public art across the CBC expansion land. The Programme is curated and co-ordinated on the developers’ behalf by cultural agency, Futurecity.
“The ambition for the CBC Public Art Programme is to embed the very best creative arts practice throughout the expanding campus. A combination of public realm projects alongside artist-in-residence commissions will demonstrate the impact and value created through collaboration between the art, design, science and healthcare”, said Andy Robinson, director at Futurecity.
Further information: 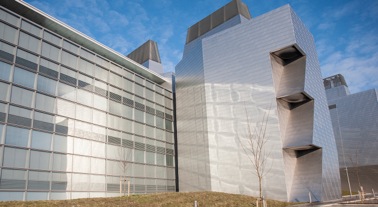 The Medical Research Council (MRC) Laboratory of Molecular Biology (LMB) is one of the birthplaces of modern molecular biology and one of the world’s leading research institutes. LMB scientists are working to advance the understanding of biological processes at the molecular level – with the goal of using this information to understand the workings of complex systems, such as the immune system and the brain, and solve key problems in human health and disease such as cancer, asthma and Alzheimer’s disease.

Discoveries and inventions developed at the LMB, for example DNA sequencing and methods to determine the structure of proteins, have revolutionised all areas of biology. LMB scientists are also encouraged to exploit their discoveries – through patents, licensing and business start-ups – helping to advance medical research and improve the UK’s economic competitiveness. To date, work carried out by LMB scientists has attracted 10 Nobel prizes, dozens of Royal Society awards and numerous other scientific honours.
http://www2.mrc-lmb.cam.ac.uk

Biographies of the artists:

30 Bird is an award winning performance company based in Cambridge. Each one of their projects is unique – no one project taking the same form as another – and often using the detail of autobiographical stories to explore global issues pertinent to contemporary society. Their roots lie in visual theatre with the company’s early work presented at venues such as the Riverside Studios, Lyric Hammersmith, Birmingham Rep, The Traverse Edinburgh, Cambridge Junction and Warwick Arts Centre. In recent years their practice has shifted to creating outdoor, site-specific, multi-disciplinary and interactive performance projects that create unique experiences for audiences. They create multi-disciplinary performance projects, often designed for non-theatrical spaces and toured nationally and internationally to theatres, festivals, cinemas and sometimes across whole cities. They want audiences to have a direct relationship with their work; to engage, to participate and to be surprised.
http://www.30bird.org

public works are an art and architecture practice working within and towards public space. All public works projects address the question how the public realm is shaped by its various users and how existing dynamics can inform further proposals. Their focus is the production and extension of a particular public space through participation and collaborations. Projects span across different scales and address the relation between the informal and formal aspects of a site.
Their work produces social, architectural and discursive spaces. Outputs include socio-spatial and physical structures, public events and publications.
http://www.publicworksgroup.net/home/

About Cambridge Biomedical Campus (CBC)
The Cambridge Biomedical Campus (CBC) is the name given to the cluster of biomedical, clinical, research and treatment organisations centred around Addenbrooke’s Hospital on the Southern fringe of the city of Cambridge. By 2020 it will be one of the largest and most internationally respected centres for patient care, biomedical research and education in the world. CBC is already home to a number of internationally renowned treatment, teaching and research organisations including the University of Cambridge School of Clinical Medicine, the Medical Research Council’s Laboratory of Molecular Biology (MRC LMB), Cancer Research UK and Addenbrooke’s and Rosie Hospitals. This concentration of clinical and biomedical expertise is now set to expand considerably with planning consent having recently been granted for up to 215,000 square metres of new biomedical research, development and clinical expansion space on a 70 acre site adjoining the existing hospital, research and development facilities. The expansion is providing new accommodation for the MRC’s Laboratory of Molecular Biology, Papworth Hospital, and AstraZeneca.
http://cambridge-biomedical.com/

About the CBC Public Art Programme
The CBC Public Art Programme is delivering two major public art projects as a fully integrated part of the CBC development. The first is a landmark art commission to design the campus’ new focal point 20,000sq.m. Circus and Piazza public realm. The second is a campus wide Artist-in-Residence programme that will commission artists from a range of disciplines to work within and across campus organisations to engage patients, staff and wider public audiences in the campus’ ground breaking work.

About Futurecity
Futurecity is a cultural placemaking agency. They have worked with Countryside Properties PLC, Liberty Property Trust and CBC organisations since 2009 to develop and implement the CBC Public Art Programme. Futurecity devise cultural strategies, broker cultural partnerships and deliver art projects from inception to completion through collaborative relationships between clients, artists and other disciplines. They champion artists who are changing the way art is presented within the built environment and public realm. Current projects range from the recently unveiled 78 metre Richard Wilson sculpture ‘Slipstream’ for Heathrow Terminal 2: Queens Terminal, to an arts programme for the new Cancer Centre at Guys Hospital, London.

In 2010 Futurecity opened a Cambridge office to support a bespoke approach to commissioning public art and cultural projects, working with Cambridge’s unique offers across the arts, culture, science and technology. Leading and emerging artists are integrating major public projects into the fabric and life of new workplace, healthcare and residential schemes, offering a range of engagement opportunities for residents, workers and visitors.
http://futurecity.co.uk